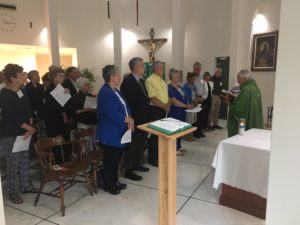 Catholic Charities of St. Louis celebrated a special mass to recognize a very generous group of parishioners from Incarnate Word Parish in Chesterfield.

On the evening of June 26, Msgr. Jack Schuler celebrated a Mass of Thanksgiving inside the atrium of the Catholic Charities central office at 4445 Lindell Blvd. with more than 40 Incarnate Word Parishioners.  They answered Monsignor’s call for their help to complete the Good Samaritan Chapel, just as they did with their own church in 1983. 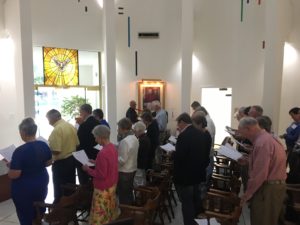 “The Parishioners of Incarnate Word moved me deeply during Mass.  We wanted to thank them for their generosity, and their prayer and spirit not only blessed the new chapel but also Catholic Charities,” said Msgr. Schuler.

Since moving to the new office location August 1, 2016, Catholic Charities has been visited by the ‘Voices’ Choir from nearby Rosati-Kain High School because of the amazing acoustics in the atrium area.  “This was our first mass inside the atrium, and I have to say, the parishioners of Incarnate Word brought our building alive and filled our new chapel with their prayerful song during Mass,” said Brian Thouvenot, Chief Development Officer. 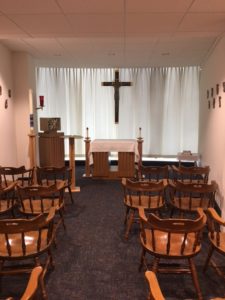 After mass, many gathered inside the Good Samaritan Chapel to view the beautiful new tabernacle, the Stations of the Cross and other sanctuary appointments.  “Because so many came to pray with us, The Mass of Thanksgiving for the donors to our chapel was the first Mass to be held in our atrium. It was truly a sight to see,” said Msgr. Shuler.

President of Catholic Charities of St. Louis, Theresa Ruzicka, CPA spoke to the group of parishioners about the impact our federation of eight agencies has in the community every day, since being founded in 1912.  “Currently we are impacting the lives of more than 136,000 of our neighbors in need, from the unborn, to those nearing the end of their natural life and everyone in between.”  Ruzicka closed, “We are grateful to those gathered here and all of those at Incarnate Word Parish for truly sharing in the mission of Catholic Charities.”