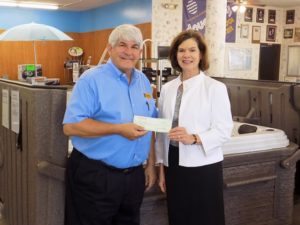 Thank you to Mike Balek, owner of Mr. B’s Pool Centers, Inc., who donated $4000 to Catholic Charities of St. Louis to help those impacted by flooding along the Meramec River in May 2017. This generous donation will help provide sustained support and long-term assistance to these families and individuals affected by the floods.

“Our customers are like family. They’re loyal to us. We do right by them, they do right by us, and they keep coming back.” Mr. Balek said, explaining the idea behind the donation. “Many of our customers and their families were affected both directly and indirectly by the floods, and we wanted to make sure we gave back to them.”

Catholic Charities of St. Louis is currently providing long-term case management to 238 households affected from the May 2017 flood as well as 100 cases from the December 2015, January 2016 flooding along the Meramec River.

“This flooding is especially hard because these are many of the communities impacted by historic flooding in December 2015 and January 2016.” Theresa Ruzicka, CPA, President of Catholic Charities also said, “Since we are still assisting many families from the New Year 2016 flood, our case managers and disaster response team are very aware of the needs families will have for the long-term.” 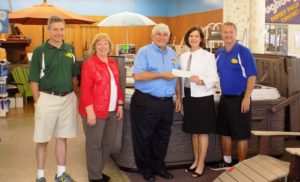 “Business owners like Mike Balek and his family at Mr. B’s Pool Centers, Inc. are what is right about St. Louis.  They treat those in need with the compassion and care as if they were their neighbor,” said Brian Thouvenot, Chief Development Officer.  “I am continually humbled and inspired by the generosity of those in our community and you can tell Mike is a business owner guided by his strong faith.”